Afrofuturism is often seen a music & sci-fi literature movement, tooled to empower black folks facing a country, a White systemic frame with no room for them in its historical narration, past or present.

Yet from Vice to the Guardian magazine, from Rihanna to Achille Mbembe, from Afropunk Festival back in Paris to Black Portraitures here in Johannesburg… reports on afrofuturism embrace an endlessly growing multiplicity of forms, leading to question if afrofuturism is even/truly unifying or just an impetus circumscribed to a certain “community”. Eg. black-America, trend prescribers or an intellectual elite… Does Afrofuturism have an effective / tangible impact worldwide ?

In his latest book, ‘Politics of Hatred’, Achille Mbembe develops on how nowadays democracy is forswearing itself in the name of the struggle against its « un-democratic » ennemies. Yet, hasn’t Sun Ra already given an answer to this, when, in his 1971 Berkley lecture ‘The Black Man in the Cosmos’, he said : « Black folks need a mythocracy not a democracy. […] ». And indeed wouldn’t the whole world benefit from some re-enchantment…?

This panel will attempt to show how, by embracing alternative narrations instead of a systemic narrative, Afrofuturism, beside being an artistic & performative statement, stands also as a political, metaphysical AND branding tool to question – if not redefine – our contemporary world, and so doing, point limits to the “sacramental” definitions of mankind, culture, time and mediation.

Branding as a political statement

“We want to be listened to, not heard ; watched at, not seen”

Guess what so I won’t develop*, Sun Ra is recognized to be the father of Afrofuturism… Dragged by the late 50’s space race context, he saw in the announced « Space Age », a promise for him and black fellows to finally escape a country that considers their lives & expectations as irrelevant. His Arkestra would become a space-ark appointed to lead his dark-skinned companions towards a renewed Earth and to restart History. As for himself, he would become the Saturnian Archangel descendant of the eponymous Egyptian God of the Sun on a mission to preach peace. 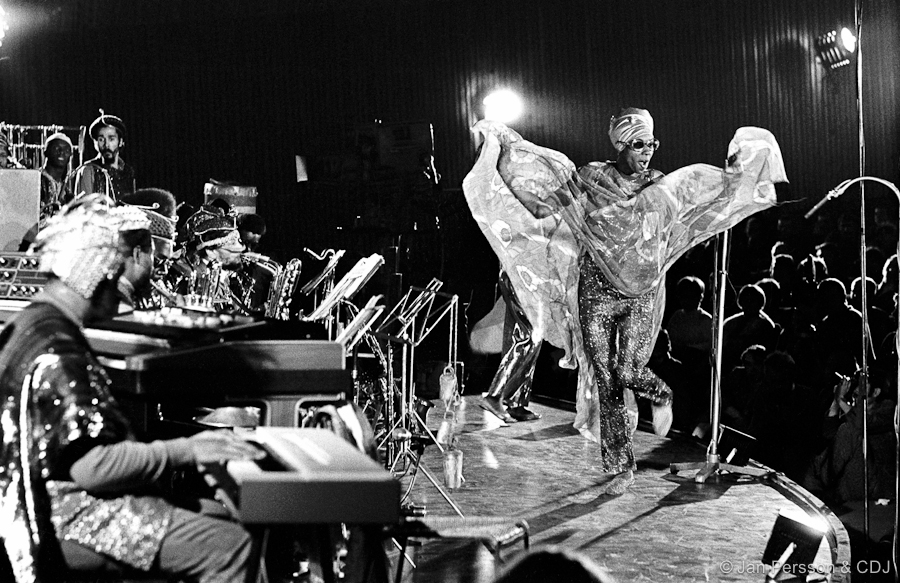 By doing so he prompted metaphors – mythical and mythological, (science-)fictional and religious – that later became essential to a dynamic highlighting the Black people distinctiveness, from how it was negatively stated towards History and how it could be, from now on, positively performed.

Far from fantasy ; Sun Ra ensured to make the World unable to doubt his otherness, his chosen otherness : not only did he register his name change to Le Sony’r Ra ; really suffering from cryptorchidism he also, like angels, didn’t have a sex. As of his Egyptian alien ascendancy… what were African-American folks if not that? Out of all, he got to be one of the first, yet heartfelt and sophisticated examples of self-branding.

According to Belgian music storyteller Pierre Deruisseau, Sun Ra & his group recorded over 120 discs from late 50s to early 90s, performed all across the US but also in Europe, Nigeria, Egypt, Japan. Above all, as of 1957, he created « El Saturn Research », one of the first US independent labels all the more created by a black musician. Sun Ra would then compose, record and release what he wants, whenever he wants, gaining an unparalleled freedom of action. « I had to have something, and that something was creating something that nobody owned but us. » would he say. 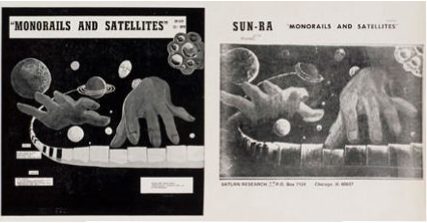 Covers of Sun’Ra’s album ‘Monorail and Satellites‘ on his own Saturn label, 1968 (later reissued on CD by Evidence in 1992).

His use of the growing craze for jazz and « black music » as a leverage to share his message – eclectic, impossible, dense – became indeed one significant game-changer, demonstrating that a black man could know how to set his own broadcasting channels & produce his own stages.

Thus, whether purists like it or not, the legacy of Sun Ra is also to be found through the use nowadays of its myth as advertising patterns ! When you are doomed with poverty porn or exoticism, knowing how to publicize oneself is also part of cutting loose. And from Chimurenga’s ‘Pan African Space Station’ to Janelle Monae & her ‘Wondaland’ label, from Anaïs Duplan’s ‘Center for Afrofuturist Studies’ to us, ‘Black(s) to the Future’ ; we surely understand afrofuturism as a methodology for action in order to produce and develop, not only alternative narrations, but channels to broadcast them. Branding ourselves is a way to reach out to more people and overthrow the shyness, the fear that we, as black people, wouldn’t be worth a wider, if not massive, attention. 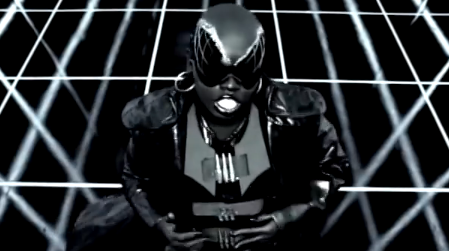 * : or maybe I will ! At least, in order to introduce you to our ‘Space is the Place’ subtitles, made by our very own and amazing Justine Rousseau., here are few words about the film :

“In 1971 producer Jim Newman approached John Coney, a producer/director at public television station KQED in San Francisco, with a proposal for a thirty minute performance documentary on the Sun Ra Arkestra. Sun Ra immediately saw the film as an opportunity to make a statement about conditions of black people on planet earth – and as a powerful medium for his music as a vehicle for lifting them out of their collective misery. Production began in 1972 with filming and recording the Arkestra, a spaceship landing, a visit to an Egyptian tomb, and a mythic celestial planet derived from Ra’s interpretation of passages from The Book of Urantia as realized in Golden Gate Park. After many months of editing, screen writer Joshua Smith was hired to work on the story line and turn the project into a coherent narrative film. All these efforts resulted in what we know today as the film Space is the Place.”

>>>>>>> To get the French subtitles, it’s free : just reach us through love@blackstothefuture.com

« I’ve been doing this for about a decade and have never once received an invitation to come to the US, so I have to assume there isn’t much interest. When it’s not negative, (…) it’s not as appealing to the public because there isn’t this great story, this very compassionate story. (…) Planets and stars and futurism and time travel – these types of visions aren’t supposed to come from black guys from Detroit. » Jeff Mills, co-founder of the Underground Resistance collective.