Of the appropriation of space in shifting Africa
Author
Ninon Blond

The second part of the interview with Mark Dery questioned the African issue of the oncoming strong demographic growth. At the end of his intervention, the author raised the question of new technologies and of their implications on the environment and on human beings in the short and long term.

Mr Dery’s conclusion seems rather pessimistic, as he puts the costs of these technologies forward – costs that counterbalance the advantage they can represent for a continent which demographic development will represent a force on the world scale in the years to come.

Thus, according to the French Institute for Demographic Studies (INED), Africa could count 4.2 billion inhabitants in 2100, against 1.2 billion today and less than 230 million in 1950. Such a population growth raises the question of an increasing consumption from the point of view of the appropriation of spaces and their environmental translation, and it also raises the question of food supply. As for the prospective approach that Mr Dery mentioned in his interview, the human and social sciences may consider the future through the reference to elements from the past, thanks to the concept of “uniformitarianism”.

This geologic concept is based on the principle that the same causes produce the same effects today than they did yesterday. We can therefore understand past phenomenons in comparing them to current processes. But we can also take into account the mechanisms of past events to set up scenarios to consider the future.

According to the World Bank, this population growth would be linked to a significant increase in productivity in the African agricultural market: in 2030, agriculture and food-processing industry could generate 1 000 billion dollars – on condition that the private and public sectors are sufficiently involved. On a continent with 60% of the non-cultivated arable land in the world and 80% of farmers, the use and appropriation of space are critical issues. Because as Michel Lussault said, “Man is a spatial animal”: the men and women who live in it produce space, but it is also a cause of struggle between them. This struggle is reflected in Africa in the purchase of land: in a global context where feeding the world is an always more compelling problematic, having agricultural land is a means to ensure subsistence but also – and especially – capital.

Read the article “Agriculture: L’Afrique peut nourrir toute la planète! (There is enough food i nAfrica for the whole planet)”

“The cornering” of land, a factor of spatial tensions

Africa has already sold worth $100 billion of land since 2000. In Ethiopia, for example, “cornered / monopolized” land (sold or leased to foreign investors at the expense of local farmers) represent more than 2 million hectares, more than half being under the influence of Indian companies. These lands are a source of capital to the country, in a development perspective. However, this “monopolization” deprives some farmers of land to grow crops on for their own subsistence: in Ethiopia, agriculture occupies 85% of the active population in 2009 and represents nearly 48% of total GDP in 2014. A “traditional” food-producing agriculture is therefore opposed to a rather capital-intensive occupation of the soil, agricultural exploitation of the soil being seen as a way for the country to obtain “cash”. 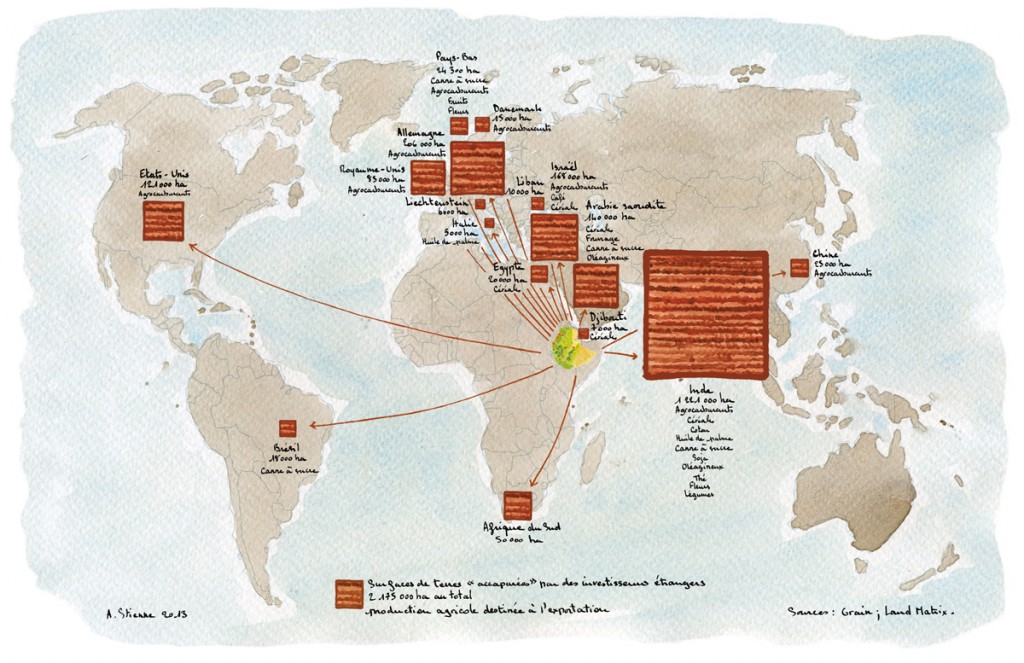 Credits: Outline of Agnes Stienne, 2013 (published on a blog of Le Monde Diplomatique)

This opposition leads, in some places, to conflicts for the occupation and use of space. In Afar for example, to the East of Ethiopia, the Ethiopian Sugar Company is located in a semi-arid zone, where the activity is predominantly pastoral or agro-pastoral. Half the production of sugar cane on these lands is intended to export and thus to generate income. But it also implies the scarcity of spaces of grazing for the local pastors, generating tensions. On the other hand, the important demographic growth to come weighs because of the urban sprawl: an increasing population requires an increase in housing, particularly in the city. The United Nations considers that in 2050, sub-Saharan Africa will have 1.2 billion more inhabitants, of which two thirds will be in urban areas – that is 800 million.

In West Africa, 125 agglomerations of more than 10 000 inhabitants were hosting 4 million souls in 1950, which is a rate of urbanization of 7.5% in the region. This number could be increased to 1 431 agglomerations in 2020, for 123 million inhabitants and an urbanization rate of 34%. This urban growth raises questions of access to infrastructures, such as water and waste water treatment as well as waste: in 2011, 20% of urban Africans had access to drinking water and 10% were connected to a sanitation network. Environmental problems also stem from the demographic pressure: for the IPCC, sub-Saharan urban areas would be currently responsible for 64 to 74% of CO2 emissions in the region. What could be the impact of urban growth on the environment?

The importance of foresight facing the technological questioning

These questions bring to light the importance of foresight in the analysis that can be based on past phenomenons. Thus, the “collapses” studied by J. Diamond in a 2006 essay involved a series of factors, among which environmental problems (problems related to the soil, to water management, to excessive hunting and fishing, to the introduction of invasive species, to population growth and to the increase of the Human Impact per capita), held a significant place. The example of the fall of the Kingdom of Aksoum, studied by K. W. Butzer in 1981, shows that the nesting of several factors, such as climate change, access to resources, demographic pressure and socio-political structures have been able to be at the origin of the fall of a city in Antiquity.

However, it is difficult to precisely determine the role of technological developments. If we were able to show that in Ethiopia, in the region of Aksum for example, the erosion rates were more than twenty times higher on abandoned soils (65.8 t/ha/year) than on traditionally cultivated soils (2.8 t/ha/year), little data exist today with the rates related to a mechanization of technology in Africa. However, we can notice a significant rate of soil degradation in the countries having already done this transition to a mechanized agriculture: in Europe, it rises up to 17 t/ha/year, which is more than six times higher than for the traditional agriculture in Ethiopia. (NB: the measurement methods differ, soils and climates are not the same; these figures are presented for illustrative purposes). The question of daily modernization is therefore resurfacing here, in echo to Mark Dery’s “warnings”, as he refuses to see the solution to all the problems in new technologies. 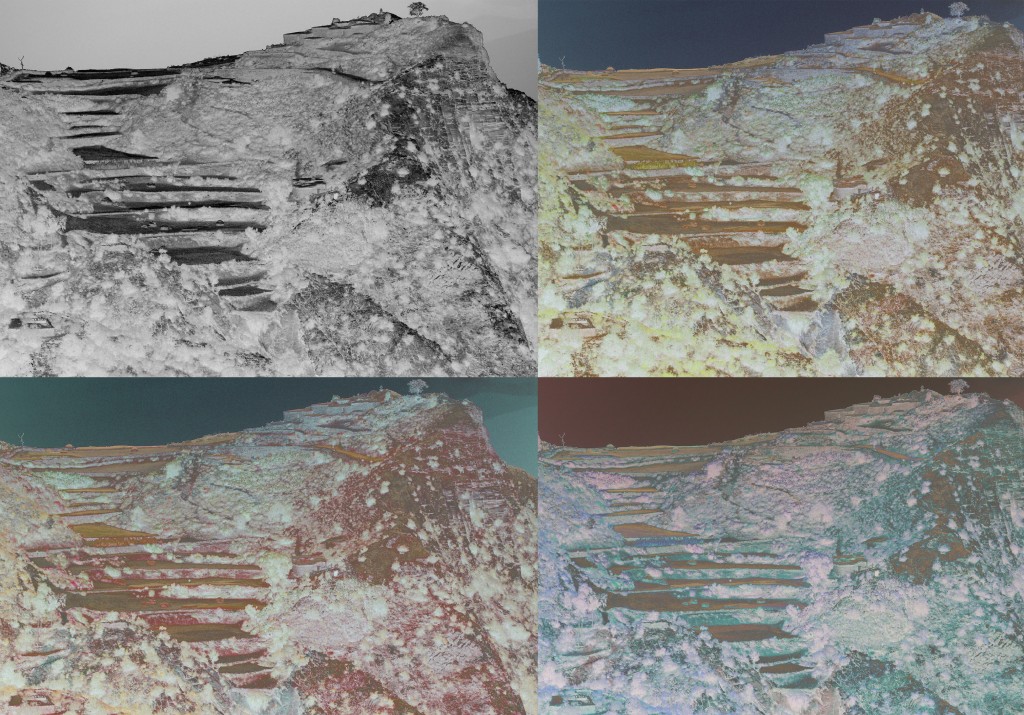 In the end, the significant African demographic growth will be a major issue for the continent in the twenty-first century. It may raise critical questions in terms of space ownership and of the use of soils in a now classic opposition between tradition(s) and modernity(ies). From the issue of food supply to that of the capitalist performance, the ownership of agricultural land raises doubts as to the future chosen by these States during their technological, demographic, urban, and environmental transitions. These choices can be analysed in the light of past events, but also of contemporary situations, to which they must be adapted. The idea is not to refuse modernity or change by claiming that the absence of technology or of mechanization would necessarily guarantee good practices, but it is to collaborate with other “emerging” economies. At a time when Africa attracts more and more the lusts of major powers such as China or India – as can be seen from the India-Africa summit held in New Delhi last October – this agreement represents a significant asset, provided it is not a pretext for the appropriation of the African soil and its resources.

Read, watch or listen to:

Last month, we drew a portrait of Mark Dery, who, among MANY things, first coined the term Afrofuturism. But what we haven’t shared with you is his “What stands beyond Afrofuturism?”, at a time showing the limits of an embedded status-quo denouncing obvious discriminations but oblivious of insidious systemic forms.

On wednesday the 16th of December, Black(s) to the Future team was invited by the French radio France Culture to participate to the the show : “Les Nouvelles Vagues” with music artist Mélissa Laveaux.

“The African man entered the future”