Often, what was retained from the 2012 Dakar address former President Sarkozy of France, was his say that black Africa lacks history. Without questioning the basis or the truth of this, the misunderstanding that shows is typical of the ignorance in which two worlds remain, yet called upon to merge together in a near future! As a matter of fact, demographic difference (European stagnation vs African explosion), geographic proximity (antiquity of commerce / mutual openness to diversity), economic complementarity (needs versus means…) renders a fusion of the two continents inescapable.

The rhetorical provocation was however expected; relying (one will explain) on the absence of writing in Sub-Saharan Africa. Because it is by this criterion that a canonic division (Eurocentric?) of historic discipline is made. This division is between prehistory, antiquity (appearance of writing), Middle Age, modern history, and contemporary history. Thus, with the appearance of written testaments (graven clay tablets, hieroglyphics, parchments, books, etc) specialists have distinguished milestones after which human history is documented.

Yet, we know today to no longer reduce the course of humanity to only writing. Oral traditions (proverbs, stories, sagas of griots/bards, traditional songs, religious rituals, linguistic schemas,  etc…)  archaeological vestiges, works of art etc, all carry a material at least as rich as formal testimonies, at least as objective as written testaments that are not ever exempt from bias, intentional ignorance, or ideological presuppositions… … to the need of history

By this example, let us retain the urgent necessity of a better comprehension of the African cultural forge! Only this will foster the union that the course of the world imposes upon us, and, as humanists, we call with commitment!

Africans, afro-descendants, afrophiles, and allies, if we first assume that the grandeur of ancient Egypt is owed to Nubia, according to the genius intuition of Cheikh Anta Diop: we must also recognize, and without shame for anyone, what all the other people of this exceptional Mediterranean intersection bring. They all were one founder of this called western world of which we are a part! But meanwhile, what about the central Asian cities, the Samarkand (Marakanda in Greek antiquity, an urban site occupied since the paleolithic), or The Boukhara? What about the civilization of the valley of the Hindu, contemporary of Egypt and Mesopotamia that stretched from Delhi to Iran and consisted of almost 5 million inhabitants in cities of names forgotten since.. Every pré Socratic greek scientist or philosopher would go there for pilgrimage in the quest of knowledge…What about the Chinese world, native land of Homo Erectus and that takes its aesthetic (in the Kantian sense) from the Mongols? What about the Pre-Colombian world?

It is thus the moment in which we realize that in the Human event, since a still-mysterious appearance, the ape has never ceased to migrate, willingly or not, for determinisms most varied: hunger, war, natural threats, slavery, and other massive displacements occurring under duress. But then, always and as much as possible, it brought with it technological and spiritual evolutions that it had been able to inherit from its precursors. It mixed them, adapting them where the occasion presented itself, to the people and places of meeting, of welcoming… Can one simply believe that from these worlds to others, even in these immemorial times, there have never been isolated voyagers such as Marco Polo or nomadic tribes – like our contemporary Roms – who, as custodians of multi-ancestral secrets, are never made the messengers of humanity ?. This exchange of knowledge has never belonged to a unique people, no more than there is legitimacy to attributing oneself to a given exclusivity. And it is this exchange of differences that creates progress!

If, during the Paleolithic, the first cities were born from the development of agriculture, what is there to say of the continuous improvement in techniques of crops storage that engendered it? What do we know about the fruitful alliances of hunters (the first secret societies..)? Issued from foreign clans, departed on far-away expeditions, they were united by the threat of Nature that dominated them all. After the encounter, each one returns home. Next, the priests and the shamans that the new economic richness of the city allows to maintain, would charge themselves of pulling out the Doxa* intended to guide the social body! From there was forged in different times, the saga of these groups and their people and we name it History!

For the others too

Europeans, Asians, Americans, Greens or Purples, name those colors of the human mosaic to know that it is their honor to have entirely held the incredible historic role of disseminating the writing, thus diffusing the knowledge towards the greatest number and thus permitting critical thought to easily feed itself from the advances of its predecessors… They have made the route of knowledge, fertile. To the rest, the developments that their respective geographic zones could have known, owe one to another, following a concentration of knowledge fostered by the economy (today we name it brain trust). This was thus no longer but a question of combinatorial on a representable episteme.

However, there remain many unknowns about the choice of black Africa, to renounce to technical development at the end of Nubia. The relationships are evidenced today from Kanem to Yoruba-land in the times when the Kongo kingdom would extend up to the Great Lakes, gates to Sudan, to Kenya, towards Ethiopia… Was it only the tropical humidity that prevented the erection of monumental cities, conversely to the Monomotapa? What could therefore be the reasons for a selection of precariousness for the first peoples; their exclusive vesting in the magical-spiritual and the imperative of Secret? What about the ecological balance of these choices for the preservation of diversity and the Gaia hypothesis, according to contemporary issues? These are new lines of inquiry as to the route chosen – or not – for each people.

Before meeting them, it is essential to capture the documentation that has been collected, analyzed to date! Every European knows of Greece and Rome, barbarians and Vikings, from Carolus Magnus to Napoleon. How many Africans know of Nubia? How many know who was first, of Kanga Musa of Mali or Sundiata Keita? How many know where was located the Monomotapa Empire ?

The Empire of Great Zimbabwe 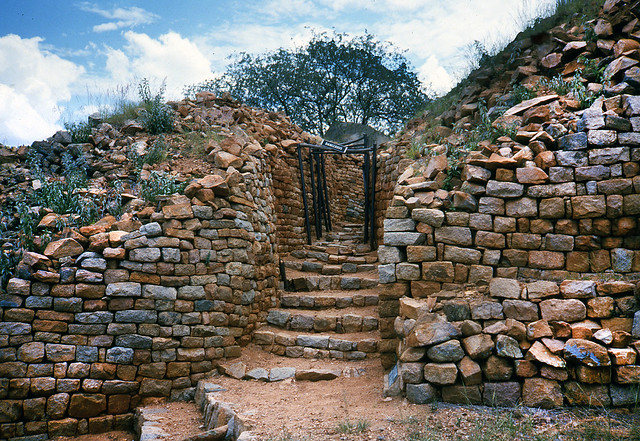 The Monomotapa was established by the Gokomere, ancestors of the Shona people. It reached its peak in the mid-15th century, thanks to the gold trade. Although the Portuguese tried to dominate the empire as of 1505, it was rival factions, and depletion of gold from rivers, which caused his fall. The empire fell under Portuguese rule in 1629. Photo © Luís Ferreira

At the dawn of African independences, Unesco launched in 1964, a project to draft a General History of Africa (GHA). The project included the redaction of a scientific basis reflecting the general path of the African people and secondly, the distribution of history textbooks for the school classes of the continent, so that all may know!

The first phase of the project ended in 1999 with the publication of 9 volumes, namely:

• Volume I – Methodology and African Prehistory

• Volume III – Africa from the 7th to the 11th century

The second phase, called the Pedagogical Use of the General History of Africa ” aims to contribute to the renovation of history teaching in African countries and promote the regional integration process launched by the African Union. It consists in developing common content in history for use by African primary and secondary schools and editing the corresponding monitoring guides for teachers. The project also aims to promote the use and harmonize the teaching of the GHA in the higher education institutions across the continent.”.

So forth, the spread is implemented, to schoolchildren and African academics. In our current “Age Of Knowledge”, the need for comprehension does not end to them alone. The means of access to this education are no longer reserved only to the “elected ones” of “Writing”. Thus at Black (s) To The Future, we set ourselves the objective of contributing to the dissemination of this book, by various outreach initiatives on our platform, notably through our THE RAW & THE ROASTED rubric: a renewed vision of the African continent, its fate, its future.

The purpose of history is to witness the paths of humanity. A review is now at works to erase deviance of discourse intended to justify the colonial enterprise by tending to accredit fables of racial superiority. It never ends, and even today, to measure the influence of this unfortunate categorization of the First Continent. How many do not remain victims, by good faith to a representation distorted by the ideological needs of this bygone era? Beyond and today, it is time for everyone, to try and know objective reasons to get out of biases due to ignorance of the other, his framing in categories purposely built to dominate him … The world will so, be much better...