This crystal of time documents a metamorphosis that puts the clothing and unclothing of the black body at its center. Touched by light, the dancers shed their succint clothes for uniforms made of plastic and shiny fiber. The change of costume signals the invisible change that seals the rebirth of the dancing figures into otherworldly beings. The iridescent outfits that capture light and sound overlay the numb mortal skin and remodulate the bodies’ capacity to feel. They irradiate shocks of energy that fragment linear time until movement is multiplied and redoubled, perceptions rewired, and life gives one last sight before disappearing into the black core of a time warp.

This futuristic tale is the brainchild of the Senegalese producer Ibakuu, created to accompany “Alien Cartoon”, a fashion show by designer Selly Raby Kane1. “Djula Dance” uses the rhythms of the Djolas from the Casamance region of Senegal to tell Kane’s story of an African city invaded by aliens2. The image of the time warp that molecularizes matter into pure energy aptly comments on the designer’s surreal fashion philosophy that combines materials, textures, and artificial applications to weave the story of a contaminated and heteronomous present.

Audiences expect nothing short of groundbreaking from designers – novelty being fashion’s most valuable asset – and Kane’s tactile storytelling unveils an eclectic exploration of the hidden facets of normality, where the alien is found in the everyday. 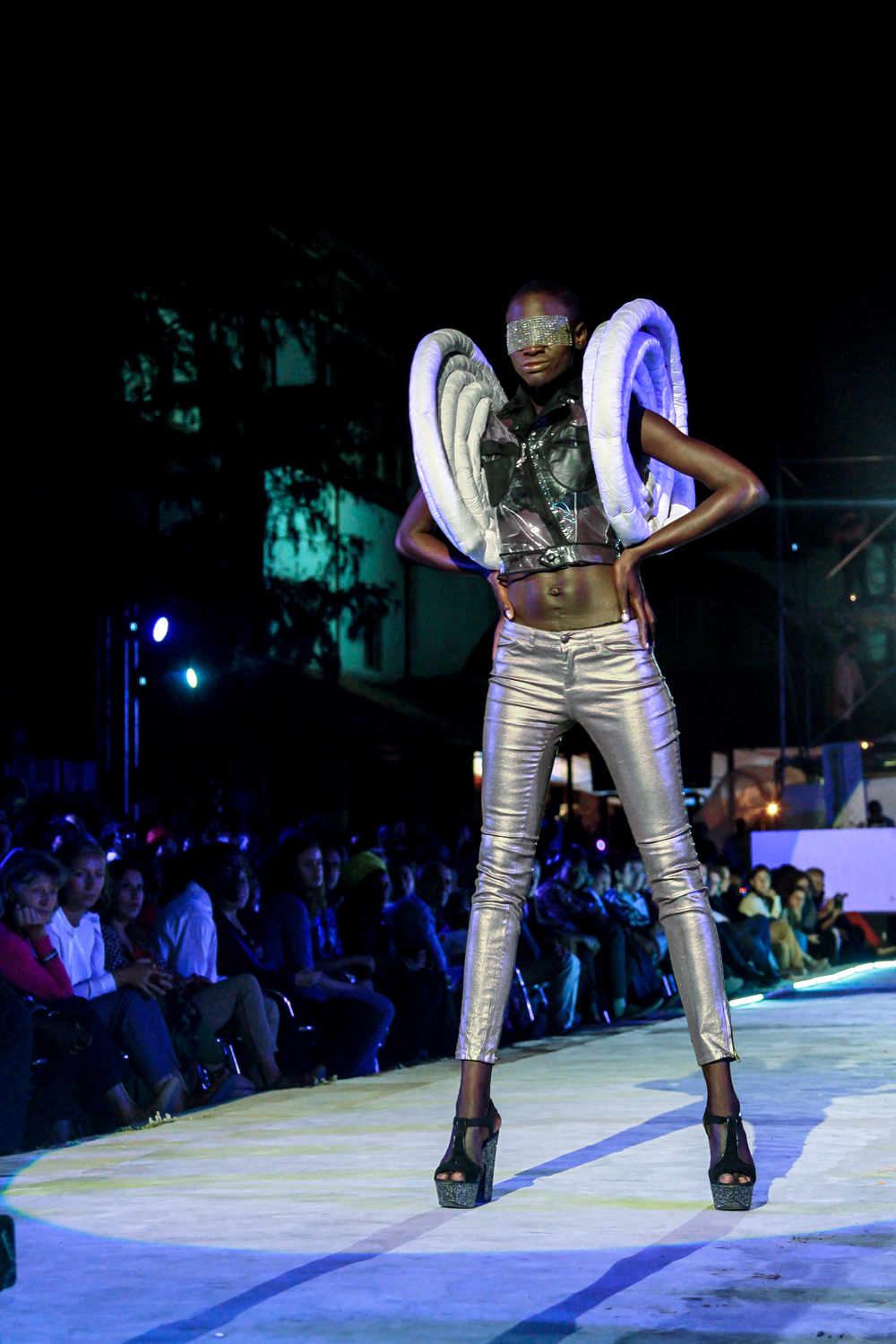 A prominent member of Les Petites Pierre, an art collective headquartered at Ouakam (Dakar), Kane mobilizes past, present, and future sources of inspiration to create a wearable version of Afro-cosmology. For “Alien Cartoon”, her Fall/Winter 2014 collection, the thirty-something went back to the sci-fi films she loved to watch as a child and her passion for narratives set in alternate realities. But this is not the only time Kane puts her sartorial genius to forge an otherworldly Africa. Rather, her creations are always crafted as uniforms of combat: ensambles to put on in the event “the alter destiny” invoked by Sun Ra3 finally happens.

While “Alien Cartoon” invents an imaginary world, Kane’s other collections extract the futuristic and the unreal from present circumstances. “Dakar City of Birds” (Fall/Winter 2915) is the best example of this approach. The collection pays homage to the designer’s hometown, featuring daywear outfits that mix bomber jackets, pencil skirts, kimonos, jumpsuits, and cozy sweaters in a variety of patterns, decorative elements and materials, including PVC and bazin. Giant insects are a staple of the collection, along with birds and geometric shapes. Kane says she wanted to acknowledge their beauty and detail4, but placed on shirts and skirts they add a touch of the dystopic to the ensambles. They act as a tactile reminder of the inevitable (albeit often unwilling and unwelcome) exchanges taking place between human and animals. The fly, especially, is part and parcel of Africa’s negative stereotype. The image of weakened children and their flies-swatting mothers has long appeared on Western media as an allegory of the continent’s perceived parasitism and defeat. In popular cinematography, the fly is an agent of the apocalypse that inspires Cronenberg’s tale of an impure and uncontrollable becoming. 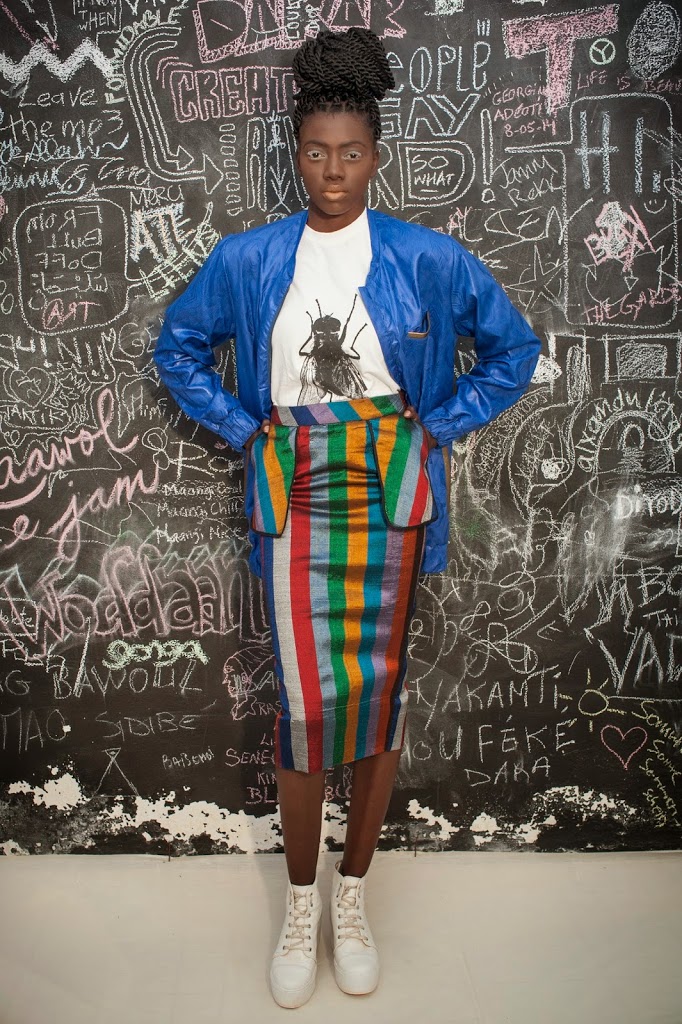 Kane draws from this body of pop-cultural references and puts our collective unconscious literally on our sleeve. The fly is there, on her creations, to announce that parasitic contamination is indeed taking place, first and foremost in the redistribution of agency and the powers to act that Africans are claiming for themselves. This reflection on post-humanism is one of the tenets of Afrofuturism.

[T]he erosion of the line separating human and nonhuman, nature and culture, and in the displacement of the human as the only depository of agency, in favour of a networked dynamics of interaction between humans and the non-human. This recombinant relationship between human and technology mutates what we know racialized cultural production to be. It re-assigns identity and upturns racial recognition.5

If “Dakar City of Birds” is an attempt to incorporate, and therefore make familiar,

the daily transformations of the metropolitan landscape6, it is also itself an intervention on the effects of such changes on cultural production. Particularly, it relates to the dynamics that are pushing young Africans to react to the encroachment of non-human forces on their condition of living, be they globalization, neo-capitalism, environmental disaster, Chinese neo-colonialism, or “modernity”. By making these changes wereable, Kane’s fashion collection experiments with a becoming-city of bodies alienated from their surroundings.

So what to make of the infecting promiscuity that the flies in Kane’s delicate sartorial compositions refer to? Certainly they pose a threat, but the designer seems not to be afraid of it. Rather, her flies herald the unmaking of the myth of purity that consigns Africa to an unscripted present. They are the symbols of an Africa in the making.

But African designers are not new to promoting a positive view of promiscuity in their creative work. Other eminent Afrofuturist designers have preceded Kane. The most prominent of these is Oumou Sy who, for the past three decades has exposed Dakar’s technological soul with cyberfemmes who wrap their bodies in modernity with ballgowns and boubous adorned with CDs, or alter-tops decorated with perfume bottles (Mustapha). This matrilinear heritage helps Kane express a vision of the future steeped in racial and neocapitalist tensions, where fashion channels a new outlook on the self-mutating relationship between Africans and their surroudings, blackness and modernity. 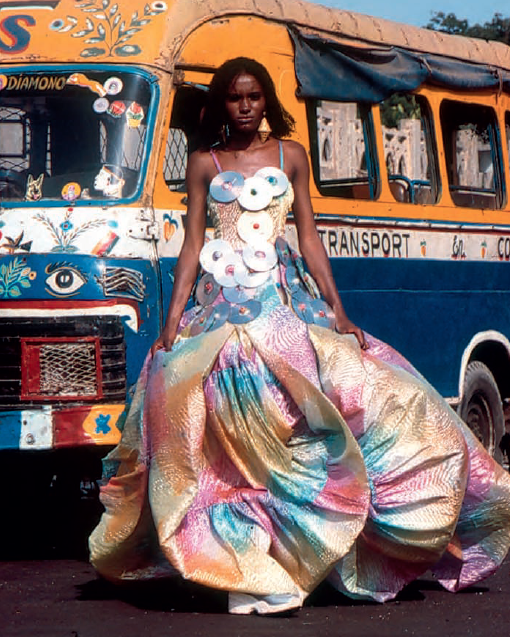 5     Dark Matter : “My measurement of race is rate of vibration: Afrofuturism and the ‘molecularization’ of race

“For better or for worse, I am often spoken of as the first African-American science fiction writer. But [among] the ranks of what is often referred to as proto-science fiction, there are a number of black writers. [M. P. Shiel, Martin Delany, Sutton E. Griggs, Edward Johnson…] I believe I first heard Harlan Ellison make the point that we know of dozens upon dozens of early pulp writers only as names […] we simply have no way of knowing [how many] were not blacks, Hispanics, women, native Americans, Asians, or whatever. Writing is like that.” Samuel R. Delany

Following a not-that-unlikely-anymore forecast; the new promises of nanotechnologies and Artificial Intelligence appear to make the threat of Human disappearance bound to happen. This said, the announcements made from transhumanists to Singularity upholder should be more than urgently put through a critical riddle…